I often contemplate my ability to live off the land should I ever find myself in that situation. Maybe I will get lost while hiking miles from civilization; maybe captured by a tribe of mountain elves and forced to hole up in the woods after escaping their mini-man jail; maybe the collapse of the economy forces me to find refuge in the woods with nothing but my bare feet, a pocket knife and my memory of edible plants. Or maybe I get chosen to be on an adventure show (such as The Survivor) and the one thing that keeps me from being voted off the island is my knowledge of building fires and finding edible nutrients. 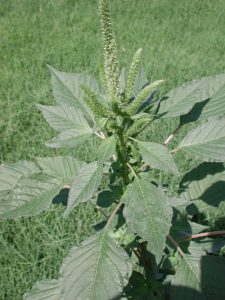 Amaranth: This weed looks a lot like pigweed. It is tall, upright and broad-leaved. and grows year-round. It comes in all shapes, sizes and colors. The seeds have a high content of proteins, essential amino acids and minerals. The leaves can be either lance-shaped or round and measure from 5-15 cm. They can be light green, dark green, reddish or a variegated color. The seeds can be white, yellow, pink or black and the flowers can have huge tassels or tiny globes that can be red, pink, yellow or cream. 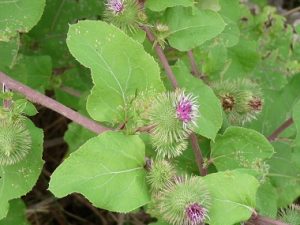 Burdock: A mostly a stout weed with annoying burrs that stick to clothing and animals. However, it is a biennial plant that consists primarily of carbohydrates, volatile oils, plant steroids, tannins and fatty oils.

Edible parts: First-year roots and second-year stems can be cooked by boiling for about 20 minutes and then seasoned to taste. However, before cooking the stems peeled and roots scrubbed to remove the bitter rind. Immature flower stalks may also be harvested in late spring prior to flowering—the taste resembles that of an artichoke. The Japanese have been known to eat the leaves when a plant is young and leaves soft. 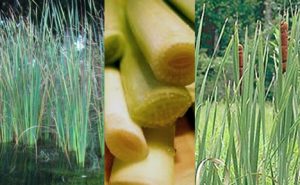 Cattail: This plant is easily recognizable by its cigar-shaped head. It is also known as bullrush and it is one of the most important and most common wild foods that boasts a variety of uses at different times of the year. No green plant produces more edible starch per acre than the Cat O’ Nine Tails – not potatoes, rice, taros or yams.

Edible parts:  These include boiled immature and mature flowers, pollen in bread, stalks as trail nibble, root starch for sustenance and root stem shoots as vegetables. The roots can be boiled and the starch stripped or sucked from the fibers. They also can be dried, the starch grated off and used as flour. You can crush the roots in water and let the starch settle  Or one can put the roots on embers and roast until black, peel the black layer and chew or suck the starch from the fibers. Also the core of the roots can be roasted and used as a coffee substitute.

Chickweed: Chickweed is common, plentiful, hearty, edible and prevalent. This is easy to grow and healthy; it produces flowers throughout the growing season, even in hot, dry conditions. Chickweed is multi-functional since its presence decreases insect damage. This plant has a lot of health benefits since it is full of vitamins, minerals and other essential nutrients.

Edible parts: The raw leaves can be used by adding to salads and sandwiches. They also can be put into soups and stews. The stems and flowers can be used in cooked dishes.

Clover: A field of clover would be your friend if alone in the wild and hungry. Clover is tough to digest raw but the leaves delicious in salads or juices. Clover is a valuable survival food since it is high in protein as well as plentiful in most parts of the world. 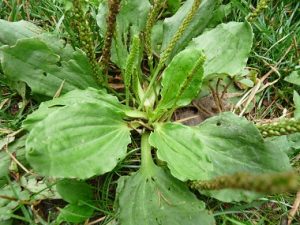 Plantain: A common broad leaved weed in the spinach family that you would want to eat, not kill. It is known for its digestive healing and is especially helpful for damage from antibiotics, anti-inflammatory or pain medicines, food allergies, excessive drinking or celiac disease.

Edible parts: The entire plant is edible. The young leaves can be eaten either raw or cooked. These are somewhat bitter and tedious to prepare. It is preferable (though not required) to remove the fibrous strands before use. Many people blanch the leaves before using them in salads. Once blanches, plantain can be frozen and then used later is sauté, soup or stew. Seeds can be eaten raw or cooked but are tedious to harvest. They can be ground into a meal and mixed with flour. Dried leaves make a healthy herbal tea.