Fluoride, a toxic by-product of the nuclear power industry and a main ingredient  in rat poison and pesticides, is being dumped into our drinking water under the guise that it’s good for our teeth. 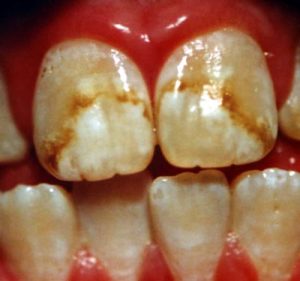 Fluoride’s harmful effects were first discovered by Nazi scientists who were searching for methods of chemical mind control. They found that when ingested, fluoride attacks the brain, ultimately rendering the pineal gland, our production center for necessary amino acids, useless. When the pineal gland isn’t functioning, we lose our capacity for independent thought. Nazis added fluoride to the drinking water in concentration camps as a preventative measure to keep the prisoners docile.

Could our government be doing the same thing to us today? If you live in the United States, it’s very, very likely that fluoride is in your drinking water. They tell us it’s is being dumped into our water for our own dental good, but that’s not the real story.

Fluoride is a toxic waste by-product of nuclear power plants. What they’re dripping into our water is not a natural substance found anywhere on the periodic table; it’s a biohazardous material called fluorosilicic acid. Power plants aren’t allowed to just dump fluorosilicic acid into landfills, so, instead of investing in proper disposal methods these nuclear plants sell fluorosilicic acid to the pharmaceutical companies, who, in turn, sell it to us.

The calcification of the pineal gland is not the only damage done to us by fluoride poisoning but for this post that is what I’ll focus on. The pineal gland, also known as the Ajna Chakra, or Third Eye, is a powerhouse of the central nervous system located in the middle of the brain. Scientists describe it as a visionary center; the gland which releases the chemicals responsible for our dreams and creative ideas and the part of the brain that becomes active when intuition is used.

Yogic wisdom says the same thing about the Third Eye Chakra that modern scientists say about the pineal gland: it’s the chakra of mystic vision and enlightened awareness. In Vedic scripture, it’s written that enlightened people have soft, malleable third eyes, moldable like clay, while people trapped in ordinary, dull logic have third eyes that are rock hard. When the pineal gland is working properly and releasing endorphins it’s soft and malleable like clay; when it shuts down all function due to calcification, it turns hard as a rock. 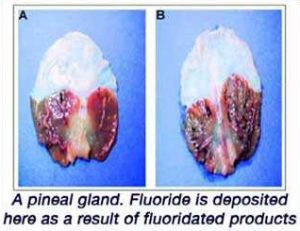 The term ‘calcification’ means the buildup of calcium crystal in soft tissue. Ideally, fluoride would only calcify the teeth… but, when ingested, it instead attacks the soft tissues of the brain. 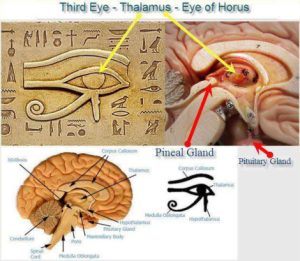 The pineal gland is like a tiny factory that produces, then releases, the chemicals we need in order to enjoy creativity, intelligence, and spiritual satisfaction. They are called endorphins, and they keep us mentally and emotionally healthy. Not only does it produce endorphins like serotonin, dimethyltryptamene and melatonin, but also essential beta-carbolines like pinoline and other cancer-preventing amino acids. The pineal gland is especially active in releasing these while we dream, meditate, create works of art and pray. Without the pineal gland our dreams would be colorless and unmemorable, meditations would be boring, creative blocks would build up against our playfulness and we wouldn’t be able to create the world in our imaginations.

While seratonin and melatonin are particularly concerned with our health and happiness, the endorphin called dimethyltryptamene (or DMT) specifically relates to our enlightenment. It is the primary molecular substance released during meditation, prayer, deep sleep and every conceivable experience we might label as “mystic.” Visions can be seen, celestial voices can be heard, out of body and near death experiences can be had, and lucid dreams can be explored when the pineal gland is properly producing and releasing dimethyltryptomene. For this reason, it has been hailed ‘The Spirit Molecule’ by the neuroscientific community who studies it.

This has been known by the sages in every ancient mystery tradition across the world. The Vedic rishis who describe in detail the function of the Ajna Chakra; the Brazilian shamans who initiate seekers into higher dimensional states of awareness through the Ayahuasca ceremony, in which a sacramental tea containing plant-derived DMT is shared; the Native American medicine men who sought communion with God in vision quests by fasting and wandering to induce their brains into greater DMT production, and more.

With the loss of our natural endorphines, we become depressed, dull and lethargic. Feeling this lethargy as the loss of something undefinable, we will seek from the outside world something to simulate the lost contentment which would be better sought in the inner world. In some cases, people will turn to illegal drugs, alcohol, and sexual promiscuity to fill the void; in others, they will take the socially acceptable (and mass-marketed) route, and instead get hooked on prescription anti-depressant pharmaceuticals.

We need look no further than the corrupt pharmaceutical industry to see why this toxic waste they call fluoride is polluting our tap water, bottled water, toothpaste, chewing gum and mouthwash: fluoride poisoning keeps us thoroughly dependent on pharmaceutical anti-depressants. Similar to the obesity epidemic plaguing our society, we’re also caught in an endemic cycle of depression.

It was the pharmaceutical industry that spread propaganda to the dental associations in the 1950’s marketing fluoride as a wonder drug against tooth decay, and it was the same pharmaceutical industry, using gullible dentists as their puppets, that campaigned the governments across the world to drip fluoride into the tap water. Basically, what they’re doing is selling us a misrepresented substance that causes a full shutdown of our endorphine release. Then, as owners of the drug monopoly, they sell us expensive drugs that temporarily simulate the effect of the lost endorphines. They are robbing us, then selling us weaker versions of that which they steal.

Fluoride is not only found in our water but also in our toothpaste, mouth wash, gum, and dental treatments. Fluoride is absorbed in micro-pores in the gums and inner cheeks and goes straight into the bloodstream. The bristles of the brush literally force the fluoride into our gums, cheeks and tongues whereupon it directly enters our bloodstream, and is carried to the brain. The good news at the end of all this is that fluorides harmful effects are reversible.

The pineal gland can be de-calcified, through combining proper cleansing, detox, meditation, and future avoidance of fluoride. You can also help to aid the process by eating an Alkaline diet, avoiding bread, wheat and grains that constrict the blood flow to the pineal gland. Avoiding calcium supplements, calcium phosphate/carbonate/dicarbonate found in a lot of processed foods. Avoid chlorine, bromide, mercury and don’t get the flu shot, which doesn’t work anyway. Some things that you CAN take that will help to decalcify your Pineal gland include; Blue Ice fish oil, Gotu Kola, Vitamin C from fruits, lemons or supplements, ginger. Other supplements include; EDTA, iodine, magnesium, chlorella and spirulina. Chorella and spirulina are super good for your brain in general and I highly recommend them. Apple cider vinegar, MSM, Vitamin D3, A and K2 also help. The high anti-oxidants of raw coco also stimulate and nourish the pineal gland.

I just recently got a Culligan bottled water dispenser in my home and it’s FANTASTIC!– Only 5$/month and the bottles are super cheap. It has a cold and a hot (170 degrees) water spout. I don’t know how I lived without it!

If you live in a city that pours this toxic waste into your water supply don’t drink from the tap unless you use a proper filter. Brita filters and boiling may remove bacteria, but both are useless when it comes to removing fluoride. Only reverse-osmosis filters can be counted on for that. They can be found at a health food stores or online.

If you’re really serious about your mental and emotional health, you can go one step further by also throwing away any toothpaste, mouthwash, gum and bottled water that’s contaminated, and replace it with something fluoride-free. Tom’s of Maine and Jason Natural Cosmetics both make fluoride-free toothpastes, and some neem toothpastes from India are also free of fluoride. Health food stores are well stocked.

When buying bottled water, it’s important to read the label. If it doesn’t specifically say “Fluoride Free” or “Sodium Fluoride: 0ppm”, then you can be sure it does contain fluoride. Don’t drink it!

For more information, check out these links, and do some digging: