From shooting music videos to delivering pizzas drones are all the rage. I’ve been obsessed with remote control flying things since back in the 5th trying to talk the parents into getting me one of those big gas powered planes everyone crashes. I’ve kept my nose in the drone game ever since. I’m continually impressed by what these things can do.  I enlisted the help of a friend who works as an aerospace engineer at NASA and has an obsession with quadcopters.

My excitement over the future of drones finally reached its peak yesterday at 4:00 pm. My buddy Kyle  posted on my wall a LINK about minidrones followed by something about taking over the world.  I brought this link up while podcasting with Hendrix.

Hendrix has been chirping about drones for a minute now. In a major debate with himself whether or not he should pull the trigger on a $500 purchase, fantasizing about the DJI Phantom.  (Little did I know how dumb that was…) 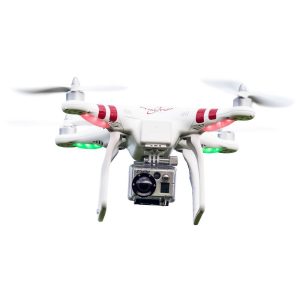 This got me looking at quadcopters on Amazon.  I quickly realized owning one was  way more attainable than I previously believed.  You can get a decent mini one called a Hudson on Amazon for $35 or $51 with camera. 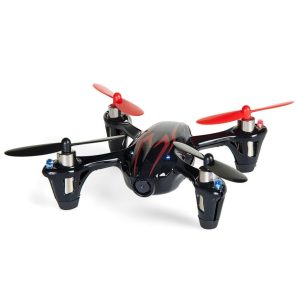 I continue down the rabbit hole devouring videos, reading reviews and scouring websites.  I find the best selling UDI U818A for $67.99 and find out the Parrot goes for ~$300.  I found the Super-X 125mm to be the best micro-quad. The only commercially available brushless motor micro-quad.  In this video it even holds a TOPCAM.  I really want to be able to haul my GoPro around and play around with aerial footage. If the thing followed me down the ski slope capturing all my 360’s that would be tight too. 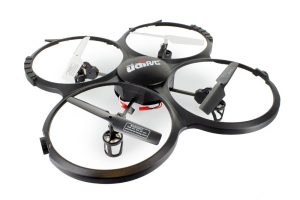 Then everything changed. I came across a DYI one, the Hobbypower x525  (Video x525 flying w/ GoPro). What better way to learn the ins and outs of quadcoptering and the drone game than to build one myself. Forget the toys, this has to happen.

The Hobbypower x525 looks much more baller than the kids versions, and it should have more staying power with my focus and attention. There is a tutorial on how to build it and I can mount a go pro to it using a gimbal! Do we have a winner? 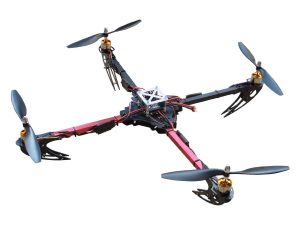 I needed an expert to help me make an informed decision. That’s when I got on the line with longtime friend, NASA Aerospace Engineer and Quadcopter expert Jake Schaefer. The tree-fort’s we used to build when his mom babysat me back in the day were ouuuuut standing — probably still standing.

I told him my goals. I told him I wanted something to follow me around all day and record my every movement. Like a self-perpetuating paparazzi.  But mostly I told him I needed to get in the quadcopter game. And I needed it NOW.

He lets me know I need the Pixhawk autopilot controller in order to get the thing to follow me around. Apparently that’s the Porsche of autopilots. He’s anti DJI so he wouldn’t recommend the phantom and the parrot apparently isn’t real good either. He recommended the 350qx as a good small gopro quad but said it wouldn’t follow me around like I wanted. At $447, it’s still a little high on the price range.

Jake said the x525 was an ARF quad that is ‘almost ready to fly.’  All I’d have to add was a transmitter and a receiver for control.  Said the best thing about quad copters is getting a video transmitter and goggles and viewing the video as you fly or FPVing. Sounds pretty sweet, but that will have to wait until after the copter materializes. Jake let’s get back to the parts list.  What the hell am I going to need for this x525?

I’ll need to fly it! Apparently HobbyKing.com hosts cheap Chinese parts. Jake linked me to the OrangeRx Transmitter and receiver. That transmitter is on back order so I looked at some comparable ones on Amazon.  Flysky FS-T6 (video review) with the US Ship Flysky receiver.  SOLID!

Okay. I put about 30 hard minutes of thought into it at this point. I think I’m going have to just go balls deep and order all the parts separate. I just got done building a computer and it’s got me in hands-on construction mode. Funny how this progressed from playing around with a $35 drone. Jake seems excited by the idea. Although the aliens at NASA have him well trained in concealing his emotions.

Jake highlights that my biggest worry is going to be compatibility. That’s where this Multicopter Calculator site comes into play. This is in dolphin speak for me at this point but I imagine as the process moves forward it’ll become more familiar. (update: still in dolphin) 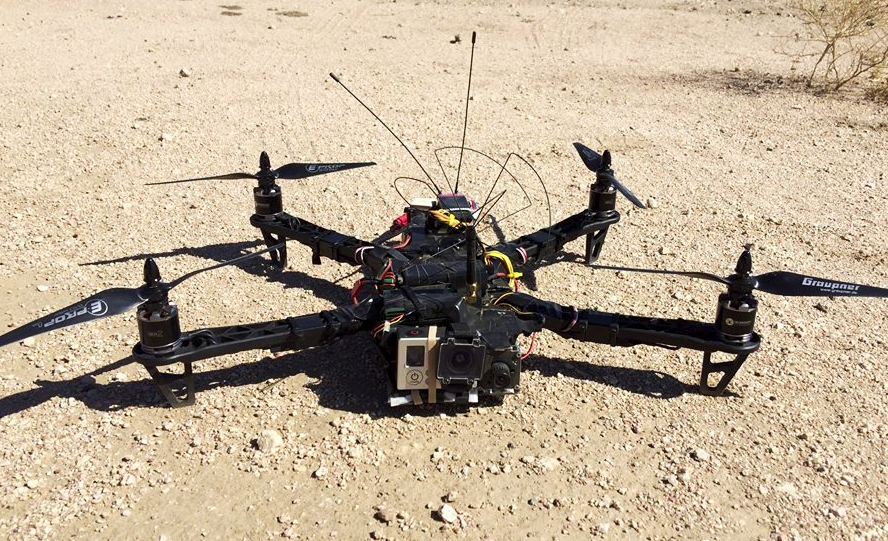 Jake says the battery size and cells depend on the motors you use. So I’ll start with the motors and propellers. Then find an electronic speed control (ESC) that can handle the amperage, then a battery with enough voltage. Then an A-frame to put it on, a flight control board, a battery and a charger. Then worry about the extras. The zip-ties, double sided tape and/or Velcro, small amount of heavy gauge wire, battery strap, and some female to female servo leads or jumper wires.  For tools, I’ll need access to a soldering iron, small screwdrivers, hex wrenches, needle-nose pliers, and a hot glue gun.

This is when Jake fills me in on some insider information.  He tells me people inside NASA are working on designing an air traffic control system for drones. While NASA wants drones, the creatures at the FAA are strongly against them and are working on regulations.  But for now feel free to fly that GoPro over professional football games, above the stage at a concert and deliver joints in customers windows from the local dispensary.

Hours go by. Jake and I start settling on a parts list. I begin to understand what things I should be looking for. This is the stage when the drone building starts to become more comfortable. It’s about 1:00 in the morning. I am 9 hours into my quest for quad copters and I am beginning to feel like I have finally found the perfect build for my situation.

Jake assures me it will fly just as good if not much better than the phantom. And with some upgrades to the controller in the future, it will blow it out of the water!

Below I will begin listing the parts I choose as well as some options for making them cheaper.

For the Frame I went with an SK450 with a Dead Cat conversion kit which spreads the front legs out. This allows unobstructed GoPro footage.  Another option for this is the Q450 at $12. 55. 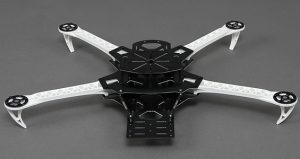 I went with 4 SunnySky motors ($19.45) which are high quality and offer less vibration than this option ($16.20). Also slightly smaller. With this option being the most budget friendly ($10.29).  Quadcopter requires 4. 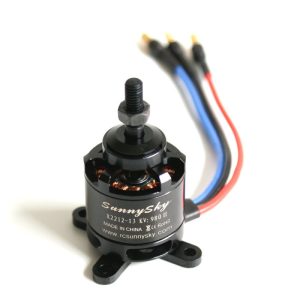 There are many options when it comes to controllers that range widely in price. These will determine how easy it is to fly your copter.  The KK2 is a very solid option ($24.99).  The DJI Naza-M ($259) and the CC3D ($89.99) also come highly recommended.  I picked up the DJI Naza-M lite ($69.99).  Hoping it gets me close to the control-ability of the DJI Phantom.  For high end look to the 3DR Pixhawk. Down the line I will also think about adding GPS. 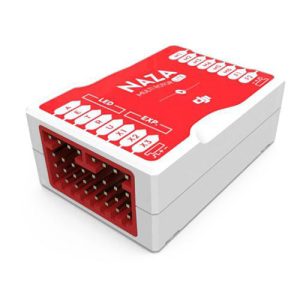 These Hobby King ECSs will work great ($8). Or upgrade to these higher quality Afro ECSs ($14) preflashed with SimonK firmware.  You need 4, one for each motor.

The battery is a bit of a balancing act. 4s will be faster with less thrust, 3s is less powerful but will last longer. If 3s isn’t powerful enough then go with 4s. If the battery life is less than 10 minutes of flight time its possible to go with 5000mAh. Jake’s best guess for this size quad is 4000mAh 3s($26.9). I picked up a 3300mAh 3s ($24.9) to start with and will continue to add as I figure out the best ratio. 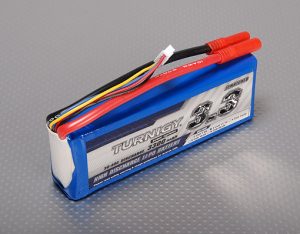 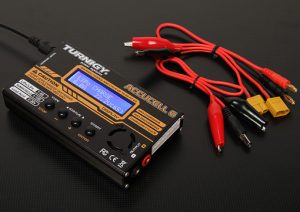 Then its propellers. I picked up 4 packs of these 10×4.5. These will break quickly as I’m learning to not crash. Apparently there are computer simulators available to quicken the learning curve. 2 motors spin CW and 2 spin CCW so you must get both kinda of propellers. They come in many different colors for swag control.  I love looking at propellers.

Many of the parts come from Europe so it can take 7-21 days for me to get here in Colorado. As they arrive I will start prepping for assembly. Stay tuned!

Please let me know if you enjoyed this article or have any questions.